“You knew what you were doing and you knew it would hurt me but somehow that still didn’t stop you.”

When you believe that the right man has come for you because of the way he cares and shower many loves on you – but along the way into your relationship, you feel that there is a hunch that your partner might be fantasizing about someone else when they are still in a relationship with you. Statistics from YouGov show partners who have thought about cheating or have cheated on before now. 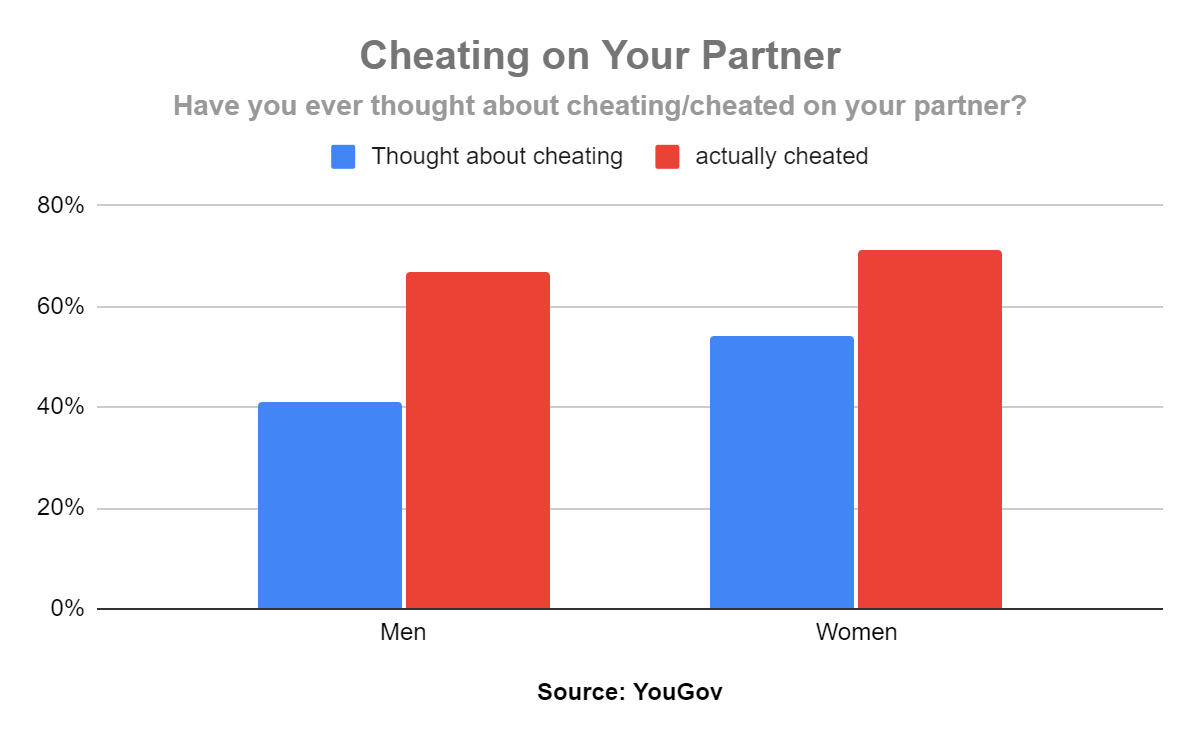 At the start of your relationship, your husband always tells you whatever is going on and how his day went without you asking. You are always the first person he will narrate all what he the experience in a whole day without leaving out any details. But now you realized that it is very hard for him to say “Hello” or “check on you”. It is clear that his mind is not always with you whenever you are discussing with him, he is always focused on his phone (chatting with someone else). Even if you try to see who is chatting with or ask whatever is going on, his reply will always be “I’m fine or don’t worry”.

Why would your husband start behaving coldly towards you? This can only mean that he is fantasizing about someone else and he wishes that he could be with her and not you. Your husband wants to share every detail with the other woman but not you. He thinks that you are no longer relevant in his life. Once your man starts nagging or he communicates less with you in a relationship, this is a sign that his mind is elsewhere and the person he is currently thinking about is not you.

Physical affection is one of the backbones of any relationship. This doesn’t not necessarily means sex, it could mean a lot of things like;

Sex can’t be excluded from physical affection because it is one of a good indicator.  The moment you noticed that your man has stopped sharing any physical affection with you, this is a sign that he has lost interest in you while he has another woman in mind. He has left the relationship because his heart belongs to someone else now while he has physically disconnected from you and he will always look for a way to leave the relationship anytime.

If he still denies that there is no woman yet in the picture, probably he doesn’t want to hurt your feelings yet and he is waiting for the perfect moment to tell you about his divorce or how tired he is about the relationship.

If he exhibits this sign, then he really has someone else in mind but won’t tell you. Do you notice that whenever you are together, he always brings new issues? Well, you are not the problem but he is only trying to transfer aggression on what the other lady had done to him.

The issue might be that you asked him about the previous outing which he lied about going with his brother, but the fact is, he did not go out with his brother but was on a date with another girl. He knows that if you push the conversation to a point, you might know that he has been cheating on you with another lady but the harsh truth is that your man has already made up his mind about dating the new woman but doesn’t know how to tell you about it.

The bottom line is that this guy doesn’t have you in mind or love you like he claimed to do at the first time, he might be fed up with the relationship and doesn’t know how to fix it but resorts to the new woman as an alternative.

Before concluding while he is fantasizing about someone else or not, ask yourself if you are really triggering his inner hero? There are a lot of things women still need to learn about a man, there are many ways to trigger a man’s inner hero and make them feel great about who they are. Every man wants to love hard and feel better in their own way and they will always go to who they feel comfortable with or someone who triggers their inner hero.

Now, you may be wondering that have you ever triggered his inner-hero before. You don’t need to act as if you are the only one who needs saving because a man also needs someone to care for them and at the same time cherish them.

The secret is that you need to learn what triggers your man inner hero and unlock it before any other woman does, only you can understand your man better but if you neglect this, he will always look out for someone who appreciate him and loves him more than you do.

You can send him a message on how you feel about him, cheer him up whenever he has a probably with his work, business or any other activities. You can be your man’s lifesaver and at the same time save him when needed.

Only you can make things right and make him realize that you only want him and he should be ready to do the same thing back to you. Once you understand what makes your man click and you are able to trigger it, in no time he will stop fantasizing about someone else.

How do you feel whenever you are on a date with someone who is always glued to his phone? This will always make you feel less or not important because whenever you are starting a conversation his face is always buried in his phone and he doesn’t even have the chance to look you directly in the eyes while talking.

He might cook up a lot of stories on how “busy he is with work”. But be honest with yourself, there is always time for everything and no one works for straight 24 hours except he has someone else in mind who keeps his company. If he is always busy with his phone every time he is with you, then he is hiding something from you. There is another woman out there who is keeping his company and gives him more attention then you.

If you try to ask him about it, he will look for a way to deflect the conversation and try to wave your mind from it because he understands that you don’t need to know about his new chick. When next you are out with your man and you noticed that he is always stuck with his phone, try to confront him about it. You can always know whether he has another lady or not with the way he replied.

It was all rosy when you started dating, he always makes up time to meet up or plan a date with you while you spend time together. But all of a sudden you noticed that he is very busy and doesn’t even have time for you again. Whenever you ask about why he is always busy without making time for you, his reply is often generic like “I am spending time with my family or I work late now unlike before.”

He might have another woman on his mind and he will prefer spending his time fantasizing about it and meeting up with her than staying with you. This might be hard to take but you need to realize that you are not the number one in his life and if he is not making time for you, then you have to let go.

You always deserve someone who will treat you better.

During your dating days, you will always notice that your guy will always shower love and affection on you, but all of a sudden all these have stopped or he has changed.

He is someone who is now acting like a stranger and he doesn’t care much about your happiness, this could be because there is another girl who has his attention already.

As a result, he believes that it is not important to make you happy. There is another woman in the picture who owns him now and your man enjoys giving out attention to her.

Your relationship has always been open with everyone knowing each other secrets and having access to phone passwords, account,s and the ability to browse through each other’s phones with ease.

But if you notice a sudden change about how he is so sensitive about his phone or he always shuns you from checking his phone. You have every reason to be suspicious about him fantasizing about someone else and he is hiding it.

This shows that the trust in your relationship is gone and he thought you are not the best person he should open up to that is why he is hiding his phone.

There is a way to test if he still trusts in this relationship or not; you can simply ask him if you can use his phone, but if he hesitates about giving you the phone or he takes his time to hide chats or delete pictures, this means he has something to hide and he doesn’t want to find out. You can ask the reason why he has changed his password or why doesn’t he always hide his chat whenever you can his phone, if his answer has no meaning this could be because he has another woman in mind but doesn’t want you to know about it.

A man who is open in his relationship will always look for a way to make his partner happy without cheating or doing things that will make them sad. The best way for you to know if your man is fantasizing about someone is when you notice the red flag; like he is always angry with you and yet smiles over the phone as nothing happens.

Dating is always great when you and your partner plan to spend a lot of time together and show each other how you will care about one other in the future.

It is not necessary for the plan to be about marriage or kids. But instead, you have to plan ahead for a weekend trip or attend a movie together in a few weeks’ time.

Do you notice that whenever you plan to hang out or have fun together, his reply always ends with “wait and see?” this means that he has a plan with someone else and you are not included. He doesn’t want to have anything to do with you, because he believes that the relationship won’t last long.

Before now, he has always included you in this future plan and told you exactly what is going on in his life, but all this has ended all of a sudden because he has another woman who has his attention. If you noticed that your guy is afraid of commitment because he fantasizes about someone else, it is time for you to walk away. You shouldn’t be the one holding on to a relationship whereas your guy has a plan to leave you for another woman. It will be best for you to leave that relationship.