“We leave our prints in people’s lives. Make sure that when people look at your print, they can cherish it.”

It is best to always keep an open mind that your partner might talk about his ex in any relationship you enter. Many people have had failed relationships before they found the right person. Their failed relationships have impacted their lives in many ways, negative and positive. If they could wish away their past, many would do it, but they can’t. While some people have chosen never to talk about their ex in their new relationships, many others still do, and it shouldn’t be held against them in most cases.

Here are a couple of reasons why your partner talks to you about his ex or exes;

When a guy tells you about his ex girlfriend, he could be assessing some events that happened in his past relationship. Whether good or bad, these memories should never bother you enough to start nursing self-doubt and lack of trust in your relationship.

You need to understand that the life he lived with his ex existed, and it will always be a part of his story. It is quite common to hear guys talk about their ex or exes when their relationship is fairly young. But as their relationship grows and matures, they’ll rarely bring up exes in their conversations.

If your boyfriend always talks about his ex girlfriends, don’t think too much about it, especially if your relationship is young. He is probably still getting over the shock of all that happened with his ex. Let him shake it off. Those tales will be stale in a few weeks, and he will rarely talk about them in the future.

If the possibility of you guys bumping into one of his exes is high, he will tell you about his past relationships. Girl, your boyfriend is trying to prepare you for unpleasant and uncomfortable situations, just in case they happen.

Sometimes it can be a ‘small world,’ and exes bump into each other. Some of them can be drop-dead gorgeous, drama queens, mothers of his children, etcetera. It would be very embarrassing for you if you didn’t know about them and yet the possibility of you meeting any one of them was high. It is a turn-off for many ladies.

When a guy tells you about his past relationships, he doesn’t want you walking out of the relationship because someone decided to bring drama to him or you. He needs you to know the full story before making any decision that would drastically affect the relationship.

The third reason your boyfriend always talks about his ex is that he hasn’t gotten over her. He is still nursing some feelings for her. It sucks to be in a relationship with a guy that continuously adores his ex over you, but it happens.

The truth is, some guys are in relationships because they do not want to be lonely. They want to be in a relationship with someone that is exactly like their ex or someone they can have fun with until they’ve figured their way back into the arms of their ex.

Some of the ways to know if a guy is using you as a rebound are; if he praises her often, recites some of her phrases often, or even knows details of her current life, he still misses her. We would never advise you to remain in a relationship with a guy that still nurses feelings for his ex. If a guy mentions his ex often and her memory competes with you, it is best to prioritize yourself and leave the relationship.

Did you know that many people still check on people they’ve dated or been in a relationship with? This study by Statista is interesting. He might be checking on his exes; that’s why she comes up in conversation often. 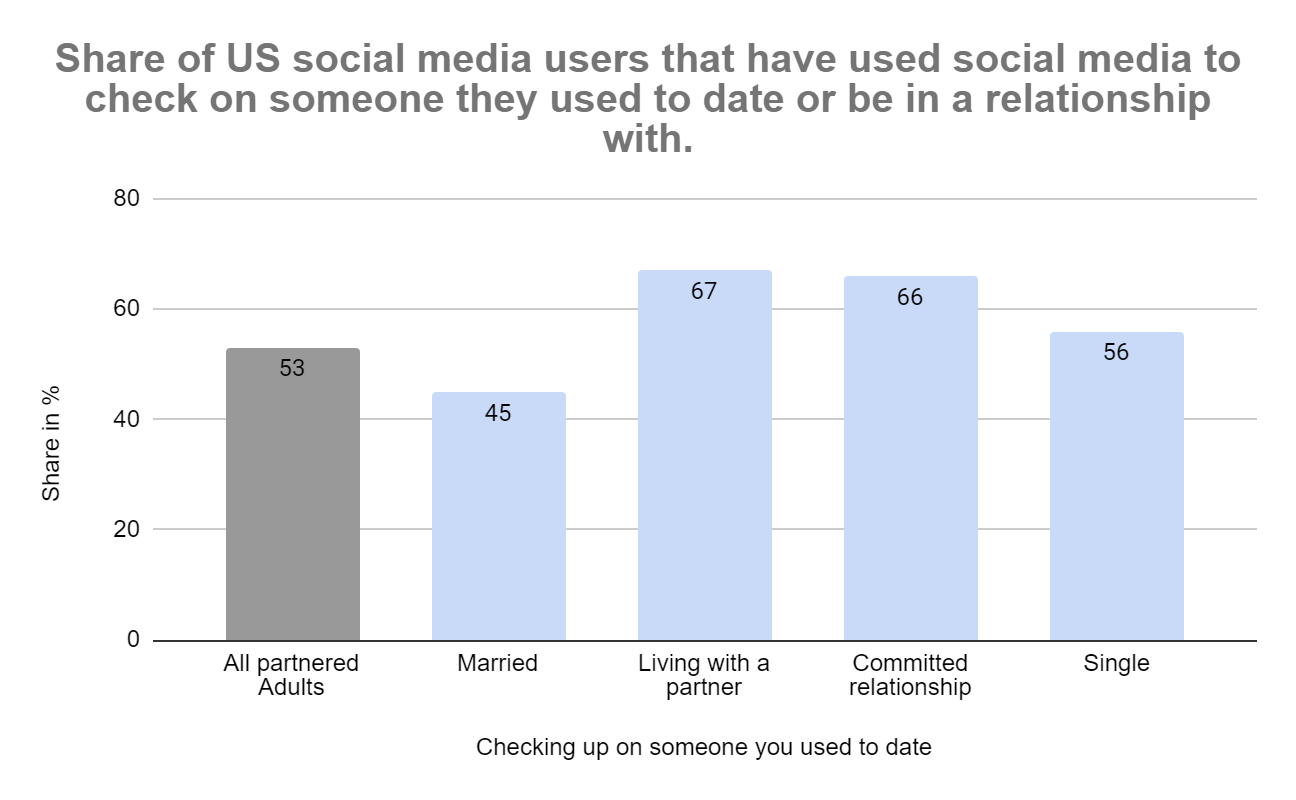 What would you do if you found your partner checking up on his ex on social media? We would love you to scroll to the end of this article and join our survey.

Whether good or bad, every relationship (past and current) has something to teach people. If a guy tells you about his ex girlfriends and what they did, it is because his past relationships have refined his needs, wants, and desires. It has opened his senses to things he can and cannot tolerate. It is wise to pay careful attention When a guy opens up to you about his past relationships. It could help you to relate to him better. See it as an opportunity to have a deep and insightful conversation with you. Share your own stories and highlight your likes, dislikes, fears, and hopes. In that way, he learns about your expectation as much as he tells you about his.

In situations where a guy notices that he will gain your trust by being vulnerable to you, he will do it. When a guy opens up to you about his past, he wants you to learn to trust him and maybe open up to him. He is also trying to give you the impression that he has nothing to hide.

Letting you in on his past might be his way of convincing you that he is a good guy and that you have nothing to worry about if you decide to commit to him.

Letting you into his past is also a way for him to connect with your own past if you decide to share your experiences with him. He is hoping that you will do that. He probably loves you and wants to commit to you.

When a guy tells you about his ex girlfriend, it is because you share some qualities with his ex that rekindles something in him, or you did something that reminded him about his ex.

If his intentions are not pure when he speaks about his ex, you’ll get the impression that he wants you to live the life of another person just to please him. He would have many unrealistic expectations for you. He would not stop talking about her even after many months of being in a relationship with him. At a point, you will begin to feel empty and drained if you stick to doing all he says his ex did for him.

If his intentions are pure, he will only talk about her in passing and wouldn’t expect you to be like her no matter the qualities he says you share with her. If a guy mentions his ex, be attentive to his reasons for mentioning her. If his reasons are self-serving, you will know.

It can be very annoying to know that you possess qualities that remind a guy of his ex. More annoying when he tries to compare you with his ex often. We wouldn’t encourage you to be in a relationship with a guy that adores his ex more than he does you.

Some guys are manipulative. They always want their ladies to do whatever they ask. These guys succeed in using ladies when they know that the ladies are attracted to them and sort of spellbound in loving them.

A manipulative guy will talk about his ex to guilt-trip you into doing whatever he wants, even if it is against your principles. He will use his ex to threaten your relationship with him. You will find yourself trying to leave up to the standards of many women that you forget to be you.

He could also talk about his ex because he just wants to mess with your mental health. He knows that if he talks to you with his ex often, it will affect your self-esteem, confidence, and create an unnatural desire for him. A narcissist will break you, and we suggest you jump off that relationship while you can.

When a guy tells you about his ex girlfriend often, it could be because he’s damn evil and wants to use you and break you.

When a guy is confident enough to open up to you about his personal life, it means that;

It could mean one of these reasons;

Click to see how to know if a guy likes you secretly.

It is quite common for people to talk about their past relationships at the start of their relationship. Talking about one’s ex should not be seen as a red flag in most cases except if the person consistently compares you to his ex, expects you to live up to the standards of his ex, or adores her and places her above you. It could be a sign that he has not gotten over his ex or is manipulating you to get what he wants.

Interesting question about your partner and his exes