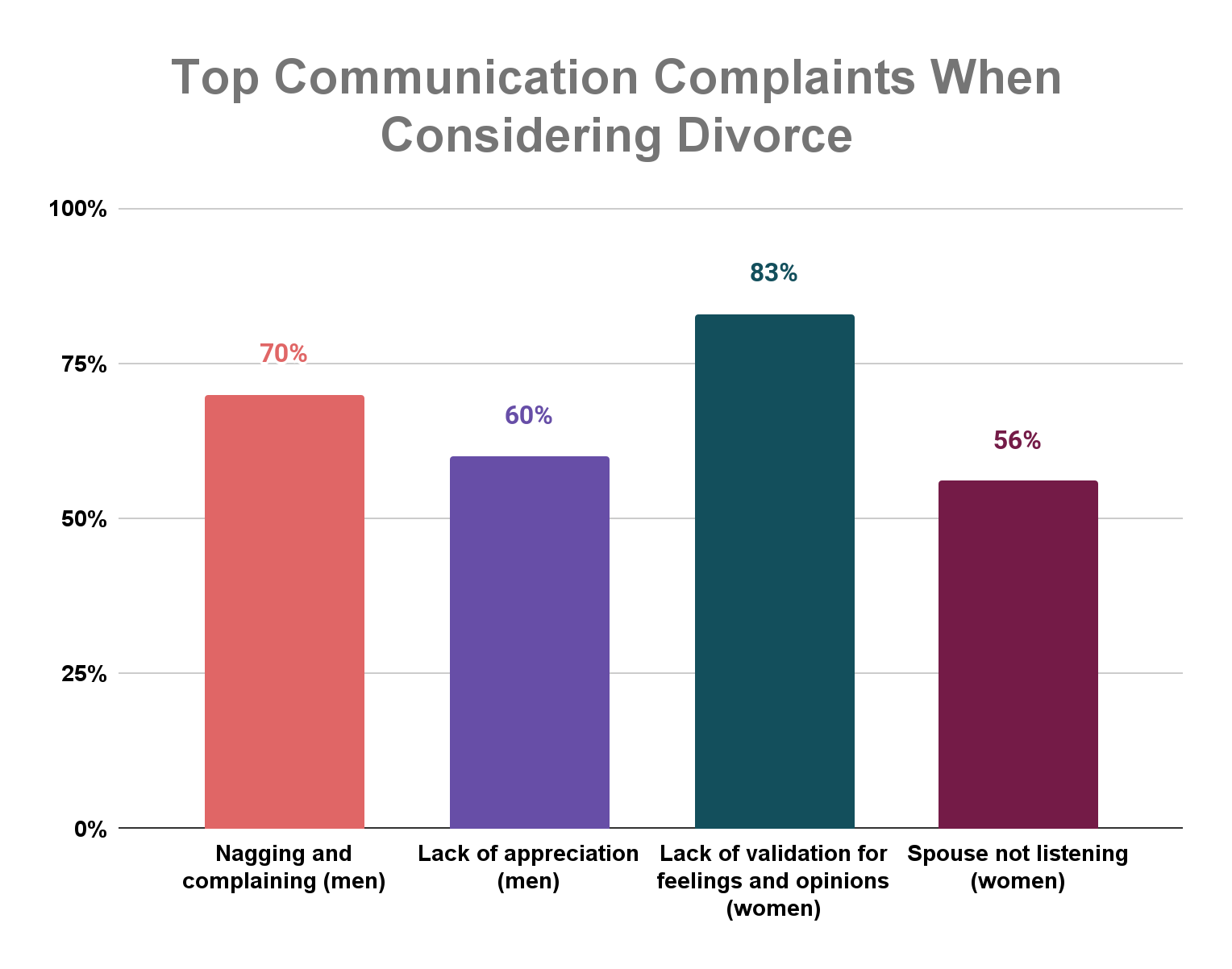 Have you found yourself wondering, “why doesn’t my husband talk to me?”. Know that you aren’t alone. According to lifestyle website YourTango, more than 50% of communication complaints by women in marriages are related to their husbands not listening to them.

This is quite a serious issue because communication is one of the most important factors to a successful marriage. Knowing that your spouse listens when you talk can increase intimacy in marriage because your need to be heard is satisfied.

Unfortunately, many husbands have been found lacking in this regard, with the issue becoming so widespread that it has become a norm. The question then is why? Why don’t husbands listen to wives?

There are several explanations for a husband not listening to his wife, and while a number of them relate to the husband, some faults can lie with you, the wife, and the way you approach conversations with him.

Therefore as we proceed with this article, don’t be surprised to see that some of the reasons why your husband won’t listen are from you and not him.

There is a chance that your husband never listens to you because he doesn’t want to give his true opinions on things. Maybe sometime in the past, he shared what he really thought about a certain subject, and you didn’t like it.

To keep the peace, he decided it would be best to not offer an opinion on some things you say. To do this, he avoids listening when you speak on certain subjects to avoid having an opinion in the first place.

If your husband doesn’t listen to your needs and you suspect this to be the reason, you can solve it by asking him to share his honest opinions and listening without argument when he does.

Men are practical creatures who love to fix things rather than dwell on them. This is why you can vent or complain to him about something happening, and his first response would be to provide solutions instead of simply listening.

Understandably, this can be quite annoying when you just want to vent and let things out, and so you might have reacted negatively in the past. This then led to a situation where your husband doesn’t listen to your feelings because he doesn’t want to come up with solutions that he can’t talk about.

Suppose you sense that this might be a factor. In that case, you might want to sit your husband down and tell him that sometimes listening to your partner without proffering a solution is preferable. Suggest to him that you just want to let things out and because he is your husband and the one closest to you, the venting is directed at him.

Sometimes in a bid to get your husband to listen, you may have repeated the same thing multiple times. This can come across as nagging to him, especially when it comes to a chore.

Husbands have various ways to react to what they term “nagging,” and one way is to simply shut you out when you speak so as not to get annoyed. According to experts, nagging is why husbands don’t listen to their wives in several cases, which is ironic because the purpose of nagging is to get them to listen when they aren’t doing so.

You can get over this problem by appreciating what he does while reminding him of something else you want him to do. The praise will make him more likely to carry out the other request to gain more recognition from you.

Find out more on How to Get Your Husband to Help Around the House Without Nagging.

It is also possible that your partner doesn’t listen to you because he has learned that there are certain conversations he shouldn’t engage in with you. Maybe past incidents showed him that his lack of knowledge or passion in the subject was not as high as you liked, which annoyed you.

In other words, it’s not that he doesn’t listen to your feelings because he is selfish or anything; he is just trying to protect himself from any backlash.

Solve this by calmly explaining why the issue is important to you and why you need him to listen. Tell him that you value his opinion, and then exercise patience when he speaks.

Imagine someone is talking to you, and instead of getting to the point, include a lot of minor details. This can easily make you confused or lose concentration. Now imagine that someone was you when talking to your husband.

If this isn’t just a hypothetical, and it actually happens, it could be that your husband doesn’t listen to you when you talk because he gets lost along the way and stops listening as a result.

The best advice here is to monitor your husband when you speak for any signs of impatience and loss of concentration. They would be your cue to keep the conversation concise and to the point if you notice them.

Why doesn’t my husband listen to me? Maybe he is a believer in the notion that if you ignore something long enough, it goes away.

There might be an issue that you rightfully have with him, yet he doesn’t want to address it. He, therefore, ignores you when you speak about it in the hopes that you will eventually get tired and move on, and the problem will simply fade into obscurity.

Another probable reason why your husband doesn’t listen to you is that you hit him with too much information at once. Maybe he’s always at work or busy with something, and you rarely get time to talk, so when you do, you try to cover as many topics as possible.

You end up talking about your day at work, your friends, issues with the family, and current affairs that interest you. With all this information coming at him hard and fast, your husband may tune out because he can’t keep up.

You can get ahead of this by pacing yourself when talking to your husband and picking only a couple of topics each time you speak to him.

The truth is, not all men can multitask very well. Watching sports, the news, or getting some work done and still engaging in conversation is a skill that only a few men possess.

This means that some of those times when you feel your husband doesn’t take you seriously by not listening might be times he is engaged in something else and so isn’t focused enough on you.

For instance, you might have approached him when he just came from work and was too tired to engage in conversation. Or maybe he is stressed about something that is preoccupying his thoughts. Point is, sometimes it’s all about timing.

If you notice that your husband is tired or distracted when you need to talk to him, tell him that you’d like to speak to him at a certain time when he is free and then exercise patience till then.

Find out How to Get Your Husband to Put You First.

Your husband is an entirely different human, which means that he likely won’t be interested in every single interest you have. For instance, he might not be interested in certain television series you follow or some sports you enjoy.

Therefore, when you end up talking about these things, he might just zone out due to a lack of interest.

Our advice on how to get your husband to listen to your feelings if this is the case is to understand that he can’t like everything you like. If you must share information on these topics, keep it concise, so he doesn’t get lost in the details.

Communication in marriage is a give-and-take transaction. You talk to your husband, and he listens, and he talks, and you listen. What happens when you don’t listen to your husband then? That dynamic breaks down, and he might grow resentful over having to be the only one listening.

This resentment can then manifest itself as him choosing not to listen to you, which would only worsen matters.

Take some time to observe your communication in the marriage, and if you notice that you are at fault or your husband says you don’t listen, then it’s time to make a change. You can do this by giving him more of a listening ear. Experts believe that this will make him more attentive to you more often than not.

If your husband always says no to your ideas, or worse, doesn’t listen to them at all, it could be that he doesn’t respect your opinions. There are several reasons this could happen, such as him believing that he is superior to you in a certain aspect or due to a past suggestion you gave going awry.

If your husband persistently refuses to listen to your ideas, then this might be the case. Your next steps would be to talk to him and set expectations about how you want to be treated as a partner. You can also set boundaries concerning your consent being needed for certain decisions.

Find out more on What to Do When Your Husband Doesn’t Respect You.

Why do husbands not listen?

What is emotional abandonment in marriage?

When there is emotional abandonment in a marriage, it means that one or either partner has given up on working on the marriage. They pull away from the other spouse, leaving this spouse feeling unwanted and undesired.

Emotional abandonment creates space between spouses and leads to a state of emotional disconnection where spouses don’t share their feelings with each other.

How can I get my husband to listen to my feelings?

It can truly be painful when your husband doesn’t listen to you because it can lead to several negative feelings such as inadequacy, manifesting.

While you work to fix these communication issues, remember that you are still a valuable person whose opinions matter, and if your husband can’t see that, he is the one losing.

Also, feel free to reach out to marriage counselors for more specific ways to deal with your husband not listening to you, as they are in a great position to help you out.

What do you do when your husband doesn’t listen to you?