How to Show Your Best Friend You Love Her

You don’t know how to show your best friend you love her? Don’t worry, we’re here to help! It’s never easy dealing with the romantic feelings you’ve started to develop. When your romantic interest is your best friend, things get even messier! Now it seems like everything is so confusing and your world is turning upside-down. Even the slightest smile she sends your way makes you think about her the entire day. You’re wondering should you tell her what you feel and how she would react. If she feels the same you would be in heaven on earth but if she doesn’t your friendship might get ruined.

All these thoughts are making you restless. Wait for a second, slow down and breathe. You’re not alone in this! A lot of people have been in a similar situation. We conducted thorough research on this subject to show you all the possible solutions to your problems. We know that everyone’s case is different but if you scroll through various pieces of advice, you’ll be sure to ease your worries. We’re here to guide you and show you how to tell your best friend you like her.

Before you proceed with the article, we’d like to mention a few things:

Be sure about your feelings

If the feelings for your best friend came suddenly, you might want to give yourself time, so all the emotions can settle down. When you’ve been hit with strong emotions without any warning signs, you think they’ll last forever. Unfortunately, that’s not always the case. You’ve heard about the difference between love and infatuation, right? One is a deep affection for someone that can pass “the test of time” and the other is a short-lived passion. You don’t want to risk a great friendship for something that can turn out to be a short-term crush.

Wait and see if your feelings will stay. Once you confess your love, there’s no turning back. Before the irreversible step, consider whether you care for your friend because she’s a great person who’s always there for you, or do you feel something more than that. The reasons behind your feelings could even be something like loneliness, jealousy, and other things that are not related to love at all! So ask yourself what do you really feel. Think about this for at least a month or two before you decide to tell her.

Should you tell her?

Before you start thinking about various approaches, ask yourself “Should I tell my best friend I like her”. You need to realize all the consequences that would follow your confession of feelings. Your friendship might change permanently, for better or for worse. You won’t “ruin” the friendship but going back to “the way things were” would be impossible.

The rejection is one of the possible outcomes of your confession. There’s a fifty-fifty chance she feels the same for you but you need to prepare yourself for all possibilities. Don’t get us wrong, we’re not suggesting pessimism here. We just want you to be realistic with your expectations, so you won’t set yourself for a huge disappointment.

A lot of people choose not to tell about their romantic feelings because they don’t want to ruin the friendship. You shouldn’t think like this. You can’t really ruin the friendship if it’s a strong one built on trust. Besides, a friendship in which one person isn’t completely honest with the other is already “ruined” in some way. You’re the one secretly nurturing romantic feelings and you think of her as something more than a friend, so you don’t really have anything to lose.

The best way you can come to a decision is to weigh the pros and cons of telling her. Think about everything good that can come from it and measure it against everything that can go wrong. You’ll find your answer when you consider all the possibilities. Note that if you get even the slightest signal she feels the same or if you can hold it in for a second longer, then tell her without hesitation.

You were thinking about how to tell your best friend you like her, so you thought it would be good to show affection with kind gestures, gifts, etc. You even considered giving your crush a gift secretly. We might agree that showing affection like that can be a great introduction to your confession. However, if you’re friends for a long time, she might not think of your acts as romantic ones. You can’t easily “show” her love because she’s so used to you as a friend and she wouldn’t notice. It would be really hard for her to interpret your sudden attention as a sign of romantic attraction.

That’s why it’s best that you “test the waters” with subtle flirting. Shake things up and she might change her perception of you. You can even court her in some ways. For example, give her compliments about her appearance. If she responds by lightly flirting back, you can proceed to the next step. If she seems uncomfortable, maybe you should break the tension in a jokingly manner, so she won’t take you seriously.

The best way of telling a female friend you like her is to be direct and honest. There’s no way around it. When every subtle hint you gave her, left unnoticed, it’s time to sit face-to-face and have “the talk”. Come up with the plan, gather up the courage and go for it.

This conversation will be tough for both of you, so you should make her feel comfortable as much as you can. That’s why it’s crucial to pick a time when neither of you has other issues to worry about.

Don’t tell her about your feelings if she’s going through a difficult period in her life, for example having troubles at home, work, or school. You should also avoid telling her if she has just gotten out of a major relationship. She would get confused and, in the best-case scenario, you would only be a rebound.

Choose the opportunity carefully because stress can influence her reaction. You won’t get an adequate answer if she’s under pressure from anything at all.

Bring your best friend somewhere private when you decide to tell her about your feelings. You don’t have to be completely isolated, of course, but you need to find a quiet place where you both can be comfortable in sharing intimate thoughts. You don’t want to be overheard when talking or, even worse, interrupted.

Be calm and collected

We know that “be relaxed” advice is not greatly appreciated. It’s easier said than done, right? However, you need to be calmed so you can express everything you want in the right way. Don’t let butterflies in your stomach stop you.

Plan what you would say and keep a few possible scenarios in your mind. Practice in front of the mirror what you’re going to say ten times and more if you need to. That should help you ease the nervousness a bit.

Be honest and direct

This isn’t called a direct approach without a reason. Don’t beat around the bush and tell her straight away what you feel. Stalling won’t get you anywhere and it will just waste your time.

Think about what you are going to say beforehand.  Phrase it as you think it would be for the best, but be sure to speak “from the heart”. Keep it simple and avoid hasty expressions of emotions. Trust us, after you go through with this, you’ll be relieved. Let that be your encouragement.

Give her a convenient way out

The most important thing about this conversation, besides, of course, telling her what you feel, is not pressuring her to make a decision. You’ll need to give her “a way out” if she doesn’t feel the same. It’s simple: just mention that it’s okay if she doesn’t want to get together and that you’ll be there for her as a friend. When you don’t put pressure, it’s more likely she’ll give you an honest answer.

Save big, dramatic displays of emotions for movies. In real life, you should try to do your best to make the conversation less stressful and tense than it needs to be. Keep the friendly, lighthearted tone you always use when talking to her.

Love statements could be saved for another time. Suddenly saying you love her is just a bit scary. Especially if she doesn’t have any clue about your feelings. Her world would turn upside down. Instead, tell her that you like her and see her as more than a friend. You might want to wait to use the word “love” once you started dating.

If she doesn’t feel the same

When she rejects the idea of a romance, you shouldn’t give up on the friendship. Give yourself time to get over her and when emotions settle down, you’ll move on to the new romantic possibilities. Then, you can work on your disrupted friendship. Take things slowly, so you can both figure out where your friendship stands. Of course, it wouldn’t ever be the same relationship as you used to have, but it won’t be worse.

We hope that now you know how to show your best friend you love her. You might not have everything figured out yet, but we’re sure you’re on the right way. Take one step at a time and you’ll notice your confidence will increase. Believe in yourself, try your best, and don’t stress too much about the things you can’t control. 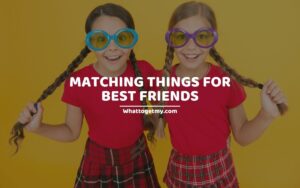 Friendship things are built over time, and along the way, you might need matching best friend stuffs to celebrate years of friendship. Curious about how to pick the cute friendship things There are a lot of matching things you can gift out to your friends. 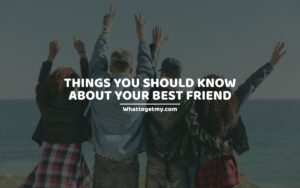 21 Basic Things You Should Know About Your Best Friend

21 Basic Things You Should Know About Your Best Friend WhatToGetMy Instructional Article Best friends should be able to pass certain friendship tests about each other. Their inability to do so means they are not paying enough attention to each other or asking the right 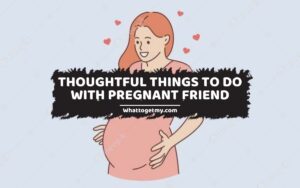 11 Thoughtful Things to Do With Pregnant Friend

11 Thoughtful Things to Do With Pregnant Friend WhatToGetMy Instructional Article With all the emotions a pregnant mom deals with, being lonely should not be on her list. There are many exciting things to do with pregnant friends to make their journey fun, fulfilling, and 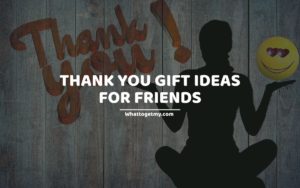 19 Amazing Thank You Gift Ideas for Friends: 10 Thank You Note to Friend

If our gratitude were ‘cake’, gift-giving would be the ‘cherry’; it makes everything more beautiful. We understand that words are not enough to show the depth of our gratitude sometimes; and even after we’ve decided to get our friends something special to say thank you, 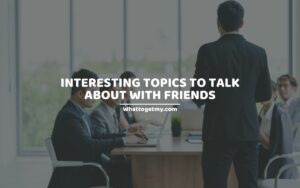 19 Interesting Topics to Talk About With Friends

19 Interesting Topics to Talk About With Friends WhatToGetMy Instructional Article Communications grow friendships as it helps us find out more about the people we call our friends. Without communication, we would not know what our friends like and don’t so that we can act 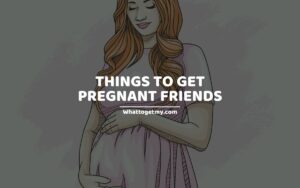 17 Thoughtful Things to Get Pregnant Friends

The journey to childbirth can be a lot easier for moms when family and friends support them. It doesn’t matter whether they are first-time moms or not, pregnancy should not be a lonely journey. In this article, you’ll find 17 thoughtful things to get pregnant