11 Signs He Is Uncomfortable Around You 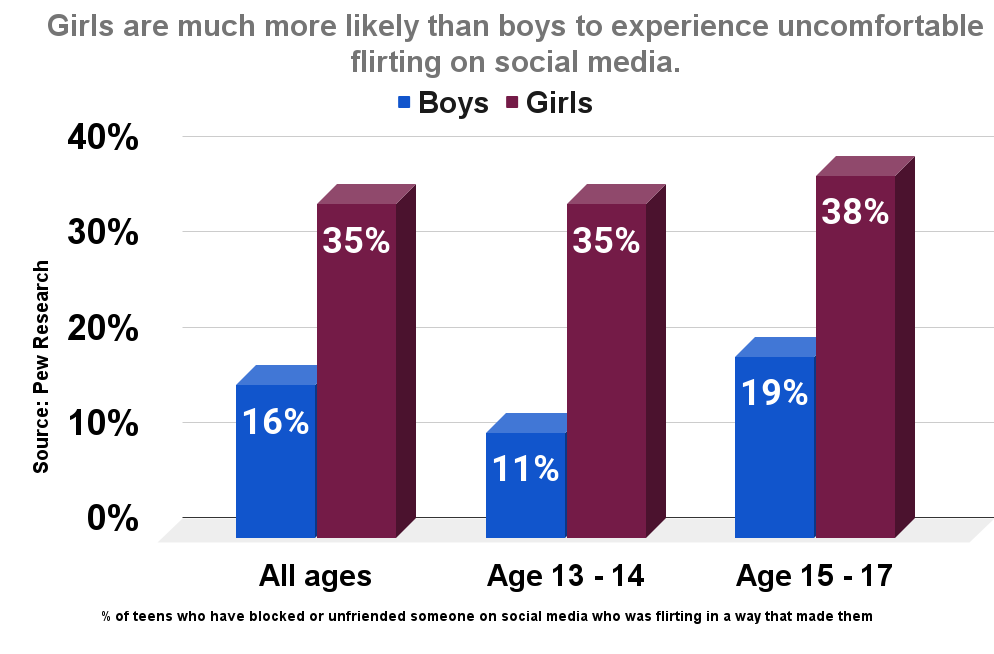 A research seen on Pew Research (and shown in the chart above) suggests that teen girls are a lot quicker to block or unfriend a guy online who made them uncomfortable in the way he flirted with them.

Why is he awkward around me? What makes a man uncomfortable around a woman.

When a guy acts weird around you or is awkward around you, it could be because of one or more of the following 4 reasons:

This is usually the number 1 reason why he is so nervous around you. A guy generally tends to be nervous and uncomfortable around the object of his affection and attraction, especially when he hasn’t professed his feelings for you. His awkwardness and nervousness in these circumstances comes from not knowing what to do or how to handle himself around you.

2. He doesn’t like you as a person and probably can’t stand you for too long.

This is the other somewhat dangerous side of a guy who acts a little more awkward around you. It is not the more common reason why a guy could be uncomfortable around you but it is a reason nonetheless.

You may find this article on 13 Signs someone wants to destroy you insightful.

3. He has likely done something wrong to you without your knowledge and being around you makes him feel stabs of guilt.

This is another not-so-common or not too obvious reason why a guy would act awkward around you. A guilty conscience is even more difficult to deal with when you find yourself in the same space as the person you have wronged. And so, it could be that he has bad-mouthed you to someone or done something wrong against you behind your back. And being around you makes him extremely uncomfortable either because it makes him have a guilty conscience or he is worried that you might figure out what he’s done wrong.

4. He finds you intimidating.

A woman especially with a strong personality can sometimes intimidate some guys. And usually, because guys are generally used to being in charge and in control of every situation, being in a position where they feel intimidated makes them feel uncomfortable.

Where this is the reason why the guy is uncomfortable around you, you can tell by how very little he says and where he eventually speaks, it feels as though he is trying to assert his authority or feel a sense of being in charge. It is because it is his way of trying to feel less uncomfortable and less intimidated.

11 Signs he is uncomfortable around you.

1. He is looking everywhere and not looking at you.

You could find his eyes darting furtively everywhere else but at you. He finds it difficult to maintain eye contact and even when he does his gaze is so shifty it leaves you puzzled. He has that uncomfortable look in his eyes when he eventually makes eye contact. And to make matters worse, he could be talking to you and refusing to maintain eye contact while talking. When you see this, do not doubt in your mind that he is very uncomfortable around you.

2. He appears to be distracted and isn’t really listening to you.

You can tell that he isn’t really engaged or engaging in the discussion even if he may nod and make the appropriate sounds to indicate that he is listening. Yet when you ask what you were talking about, he would not be able to tell you. Distraction is one of the common signs of discomfort.

3. His body language suggests that he can’t wait to get away from the conversation.

This one isn’t so hard to tell. You can tell by how hurriedly he speaks or how quickly he wants to get up and leave.

4. He is on his phone the whole time while you’re talking to him.

This is one sign that can be or appear rude and annoying. And yes it is rude to be using one’s phone while someone is trying to have a conversation with you. For some guys, they are just plain rude and see no problem in using their phone while talking to you. However, for some other guys, their phone is the only distraction they can use to hide their discomfort.

5. You find yourself repeating answers you’ve given before.

If you find that you have to answer the same question more than twice or thrice, then you can be sure that he is uncomfortable around you. 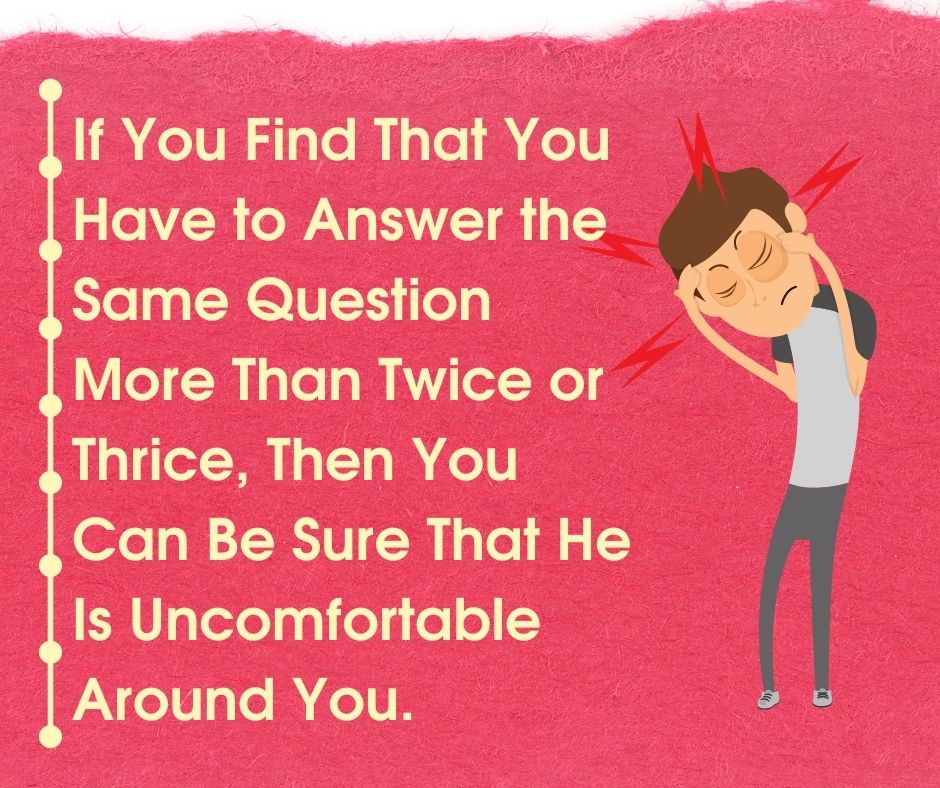 This is another uncomfortable reaction you will notice when a guy is uncomfortable or nervous around you. His nerves are affecting his ability to properly process what you are saying and so he keeps asking.

6. His body is pointing away from you.

7. He doesn’t attempt to make conversation.

You might find that you are the only one trying to keep the conversation going. Usually, a guy gives off this sign of discomfort because he either doesn’t like you or is tired of being around you and wants the conversation to come to an end quickly.

8. He’s fiddling with anything that he can find.

Are his hands restless and all over the place? He seems to be picking up everything and anything around him and playing with it and distracting you in the process? Yup. he is certainly uncomfortable around you and fiddling is his way of handling his discomfort.

Do you sense that he is on edge and almost very restless? This sign of discomfort could either be because he likes you or because he has done something wrong to you behind your back and is worried that the longer he stays around you, the more likely it is that you find out what he’s done wrong.

10. He has a nervous and forced laughter.

You can almost hear the effort behind the laughter and feel that he is trying so hard to laugh. He is trying to use the nervous laugh to mask his discomfort and hope that you don’t notice. Except that you most likely have noticed.

11. He folds his hands across his chest.

This is another passive-aggressive sign of discomfort of someone who doesn’t like you or just generally doesn’t feel comfortable around you. It is an indirect way of communicating that they are uncomfortable being around you, and not in a good way. Usually, people fold their hands across their chest as a defense mechanism when they are in an extremely uncomfortable position or feel as though they are about to be attacked.

1. How to tell if your boyfriend is embarrassed of you?

It can be pretty devastating to have a situation where your boyfriend is embarrassed by you. If your boyfriend is embarrassed by you, he will hardly introduce you as his significant other. He will almost always introduce you just by your name or as a friend. He may also find it difficult to hold your hands in public where there are people and yet have no problem holding your hands in a public place when there is no one around.

You don’t deserve being in such a relationship because you are deserving of love. Once you see these signs, show yourself some love and leave him because he doesn’t deserve you.

Check out When should you give up on a relationship.

2. My crush acts awkward around me, what does it mean?

3. What are the signs someone is nervous around you?

You will likely find them showing all or most of the 11 signs listed in this article.

5. How do you deal with people who make you feel uneasy?

If a person makes you feel uneasy and you find that the circumstance isn’t such that you can verbalize how you feel, the best thing to do is to politely ask to take your leave. However, to avoid situations where you leave the person second-guessing themselves and wondering what they might have done wrong, the best thing to do is to politely and gently let them know that they make you uncomfortable and also let them know the reason(s) why they make you feel uncomfortable. This will also help them in improving themselves if and where this is needed.

6. How can I go about making people uncomfortable?

When a guy acts weird around you, it can be for one or more of 4 reasons – it is either because he likes you and has a crush on you, or he doesn’t like you at all and cannot stand you, or he is intimidated by you; or in extreme cases, he has done something wrong to you behind your back.

And for whatever reason he may have for being awkward around you, you will know that he is uncomfortable around you when you see him display one or more of the signs of discomfort listed in this article. 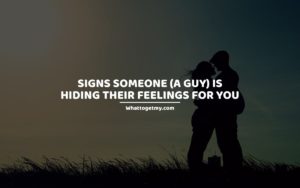 15 Signs Someone (A Guy) Is Hiding Their Feelings For You

15 Signs Someone (A Guy) Is Hiding Their Feelings For You WhatToGetMy Instructional Article Find out all you need to know about a guy hiding his feelings for you in this article. We answer the question of why guys hide their feelings and how to 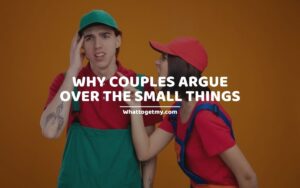 Why Couples Argue over the Small Things – 17 Reasons Why and Ways to Overcome It.

Why Couples Argue over the Small Things – 17 Reasons Why and Ways to Overcome It. WhatToGetMy Instructional Article Conflict is bound to happen in relationships because people are fundamentally different. What isn’t healthy, however, is this conflict being persistent and over little things, as 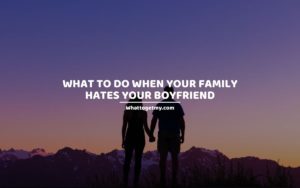 What to Do When Your Family Hates Your Boyfriend

What to Do When Your Family Hates Your Boyfriend WhatToGetMy Instructional Article There are many reasons why your family would not approve of a person you are seeing – some of these reasons might be valid, while some of them might be vain and shallow. 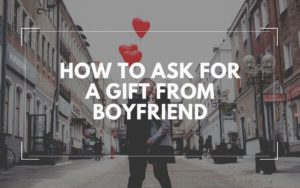 How to Ask For a Gift From Boyfriend

How to Ask For a Gift From Boyfriend WhatToGetMy Instructional Article My boyfriend never bought me a gift is a common sentence we hear these days. We don’t know why, but men have difficulties to just go to the store and buy a gift. It’s 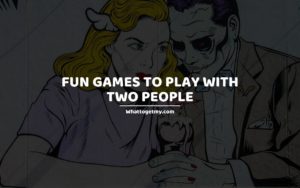 9 Fun Games to Play With Two People WhatToGetMy Instructional Article If you are looking for two-player fun games for friends, couples, and strangers to enjoy, bond, and kill boredom, you’ll find this list interesting. It is important to note that this article only focuses 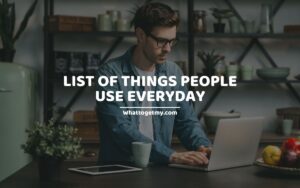 Isn’t it annoying to have a pile of products that are not useful to you? Wouldn’t it be great to have enough important products within your reach so that you wouldn’t feel guilty about shopping for other items you want? You will also feel a 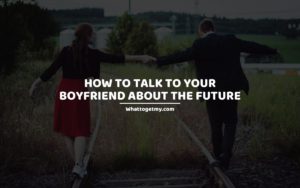 How to Talk to Your Boyfriend About the Future 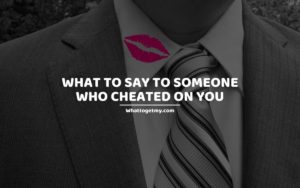 What to Say to Someone Who Cheated on You

What to Say to Someone Who Cheated on You WhatToGetMy Instructional Article Getting cheated on can take a toll on both your mental and physical well-being. When you find out that you have been cheated on, your first instinct will be to confront your partner 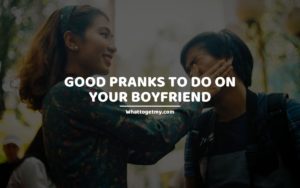 Good Pranks to Do on Your Boyfriend

Good Pranks to Do on Your Boyfriend WhatToGetMy Instructional Article There are a lot of different views when it comes to pranking. You should only prank people who have consented to the pranks and always keep your pranks safe and harm-free Pranking your boyfriend is 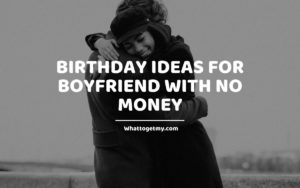 Birthday Ideas for Boyfriend with no Money

Birthday Ideas for Boyfriend with no Money WhatToGetMy Instructional Article Sometimes, you have to be more creative when celebrating someone’s birthday, especially on a low budget. Organizing a big event is quite easy and it doesn’t demand extra creativity. On a low budget, however, you