How to be a Secret Admirer to a Guy

It’s never easy to take a lead and admit the feelings you have for another person. It might be even harder for girls because society expects them to wait for guys to “to make the first move”. That’s why you’re probably thinking about ways how to be a secret admirer to a guy. If you’re totally smitten with someone, it’s normal that you feel scared of being rejected. Take a deep breath! You don’t have to do anything you’re not comfortable with. We suggest you start by making small steps. We’ll try to help you out and guide you through the operation: secret admirer.

Before you keep scrolling, we just want to remind you of something.

Every courtship starts with compliments. If you are scared to give them in person, a thoughtful note is the best option. You probably already know how to write a secret admirer note, but you’re scared to act. The good thing is that you can write it anonymously, so you won’t reveal yourself! Even if he doesn’t have a great reaction to the note nobody would know that you sent it. Just relax and put your feeling on the paper.

The note shouldn’t be too long. Just clearly state how you feel and maybe add a cute comment. Don’t write about strong feelings such as “love” or passion, because that would make him uncomfortable. You’ll need to learn how to be a secret admirer without being creepy, and the first step would be to maintain a lighthearted tone in your notes. It would be just enough to say you like him and give a reason why. Your note should be short, simple, and breezy.

The main goal of sending the note is to let your crush know you’re interested. If you’re not brave enough and want to be anonymous, you should add the reason for hiding. For example, you can say that you want to add intrigue and romance into everyday life. Be a bit playful and try to spike his curiosity. You can, of course, be open about your identity and add a phone number or an e-mail address in the note, but then you wouldn’t be a “secret” admirer anymore. Some people would probably skip the “secrecy” part. If you’re one of them, move on to the next steps – romantic cards and gifts.

A romantic card lets you be straightforward about your feelings. You don’t have to sign it, of course, but you can be more open about your love interest. Don’t get carried away with the over-the-top romantic card. Try to choose one that’s simple and cute. Guys usually don’t like overly romantic stuff and a bunch of pink hearts and love statements might make him disinterested. That’s why it’s better to find a casual card and write a cheerful message – it’s more than enough to spike his interest.

Before we move on to the gift section, here are some tips about cards and notes:

When thinking about what secret admirer gifts to get, remember not to give extraordinary and too personal gifts. While it’s okay to give expensive items (think jewelry and high-end tech stuff) when you’re dating, it’s not the same when you’re just flirting with someone. When you’re trying to get a relationship started, expensive gifts can be too much for someone to handle and might even scare your crush. Choose the safest gift option: chocolates. Everyone (well almost everyone) loves candies, so you can be sure that a candy bar would make someone’s day better.

If you’re not sure about what to do, put yourself in your crush’s position. Would you like to receive small chocolate from “your secret admirer” or would you like to get a big over the top present from a stranger? Sure, you can get your crush something other than candy, but before you decide, think about what kind of message that sends. For example, a nice book would be a great gift, but a collection of novels from his favorite author would not. Keep in mind that he doesn’t know you and vice versa, so you aren’t supposed to know what’s his favorite author, right? He would just think that somebody is stalking him.

You might even know each other a bit if you work together or go to the same school. Depending on how much you know each other, you can make a good gift basket and that can be your gift. It’s easy to choose when you think about a present from his point of view.

An act of kindness

If you encounter your crush often, you can do small acts of kindness for him. For example, if you’re colleagues and you see that he’s exhausted or sleepy, offer him a cup of coffee. To keep anonymity, wait for him to leave his desk and place fresh coffee on his table with a cute note attached.

You can be kind to people for no reason at all! That’s why it wouldn’t be strange if you do something sweet for your crush. Think about generosity for a moment. It can be really good for you to spread kindness all around. There are a lot of ways to show generosity and kindness, so don’t hesitate to try.

We already talked about how to give your crush a gift secretly. We’ll mention some things again:

It’s time to let him know

Prior to introducing yourself as the secret admirer, you can drop clues about your identity. If you know he’d be into the guessing game, go for it! Try not to complicate it a lot, though. Give just enough to spark his curiosity. Intrigue him with a comment such as “I liked your presentation in class (or meeting) on Tuesday”.

Don’t push yourself over the limits you’re not ready to cross. Continue with your normal daily routine until you’re ready to reveal your identity to your crush. You’ll know when the time is right as you’ll feel the courage inside. At that moment, tell him who you are.

Pick a public space for the meeting

Always choose a friendly public place for the meeting. Why you may ask? It’s simple. You know what kind of person you are (kind, gentle, not dangerous, etc.) but he doesn’t. You’re a stranger to him and he doesn’t even know your name. Naturally, he would be more open to a meeting in a public space where he would feel safer. It’s not just a matter of safety. Coffee shops or restaurants are comfortable places and he’ll be more relaxed there than in a dark movie theatre, for example.

You can always ask around to find out how your crush feels about his secret admirer. Do you know his reactions when finding the notes? Is he excited or uninterested when he mentions the gifts he received to his colleagues? Those things can help you decide whether you should introduce yourself or not! If he’s thrilled to have an admirer, you’ll know you’re on the right track, so keep going. If not, it’s probably best you give up before the meeting.

Once you’ve decided you want to reveal yourself as his admirer, there are a lot of ways you can do that:

Whichever option you choose, the most important thing is to believe in yourself. You’ll need all the courage you can find to get through with the reveal. The moment of telling your crush the truth is here, so don’t back out.

When you tell your crush how to find you, be ready for all outcomes. Life is not a movie and people react differently to meeting a secret admirer. He might be open to the idea of a date and he might even like you back. However, there’s a chance he’s not into you, so be prepared. Practice in front of mirrors all the scenarios you can think of. That way, you’ll be calm and confident in front of him.

After the big reveal, once the awkward chatting passes, ask your crush on a date. You can go on a date right away (for example in the restaurant you’ve met), or you can schedule it for another time. Take into account both options when planning the meeting. Choose a nice restaurant, but also have a backup plan for a perfect date if he wants to go somewhere else. Make sure he’s comfortable and that he wants to hang out with you. After that, everything else is easy.

We hope that our guide on how to be a secret admirer to a guy was helpful. You might have learned how to find the perfect balance between seeming too eager and too creepy. The most important thing is to be calm and confident and you can easily follow the steps described in the article. We’re sure you’ll get the wanted outcome.

The best possible scenario is that he shares your feelings. However, guys are not that easy to figure out. If he’s being mysterious and giving you vague answers, you’re probably confused about the whole situation. You can’t play games forever, so you’ll need to ask what he wants from you. Good luck! 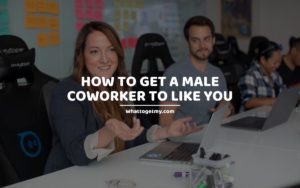 How to Get a Male Coworker to Like You

How to Get a Male Coworker to Like You WhatToGetMy Instructional Article Before embarking on wanting to get a guy at work to like you, or flirt at work, be certain that there are no policies in your company against romantic relationships between coworkers. Where 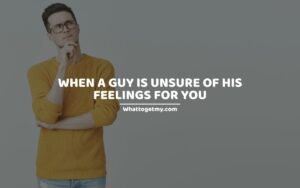 When a Guy Is Unsure of His Feelings for You

When a Guy Is Unsure of His Feelings for You WhatToGetMy Instructional Article How do you know when a man is unsure about you? There are times when you will feel like the guy are dating might not be on the same page with you. 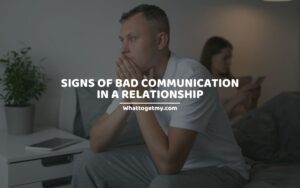 9 Signs of Bad Communication in a Relationship

What Not to Do in a Relationship With Your Boyfriend

What Not to Do in a Relationship With Your Boyfriend WhatToGetMy Instructional Article Many common relationship mistakes can kill a relationship faster than cheating. Most of these mistakes are made stem from a place of insecurity and self-doubt. Knowing what these insecurities are and how

9 SIGNS HE IS FANTASIZING ABOUT SOMEONE ELSE