How To Know If Your Child Has Autism

Disclaimer: We are not experts or medical professionals in this field. Our views on this subject are very much limited to what our research revealed. It should not replace your seeking a professional’s attention and opinion if you are worried that your child may be autistic.

Autistic disorder, or autism, is one of the conditions in the autism spectrum disorder (ASD). It is one of the types of developmental disability that affects both children and adults. It affects a child’s or adult’s social, behavioral, and communication abilities.

According to one 2018 survey seen on Statista, the larger ASD accounted for 2.5% of developmental disability in the U.S from 2015 to 2018. And according to another survey also seen on Statista, as of 2016, at least 18.5% of U.S. children suffered from one form of ASD or another.

Percentage of U.S. children aged 3-17 years ever diagnosed with a developmental disability as of 2015-2018, by condition. Source: Statista​

Rate of autism spectrum disorder among U.S. children from 2000 to 2016. Source: Statista​ 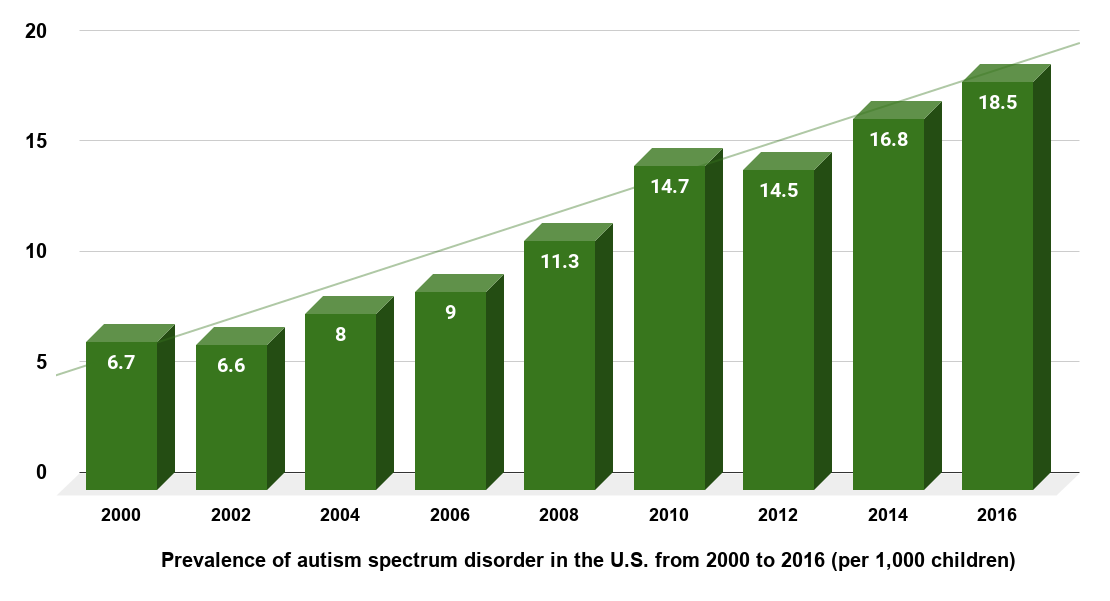 According to the Center for Disease Control (CDC), there is as yet no scientific or other knowledge or explanation for what specifically causes autism in both children and adults. There is still on-going research into the causes of autism. However, what is known at present is that the following factors contribute to a high risk of autism:

Vaccinating a child does not cause autism and that myth has been debunked by medical professionals. It is important to say this because a survey seen on Statista shows that as high as 46% of Americans as of 2019 were still unsure about whether vaccines cause autism.

Percentage of U.S. adults who thought certain vaccines cause autism in 2015 and 2019. Source: Statista​

You can rest assured that it does not cause autism or any ASD. Vaccinating your child and doing so on time is in the best interests of your child’s growth and well-being.

Autism or ASD can have a severe impact on a child’s general well-being if not treated as early as possible. According to one survey seen on Statista, at least 31% of children with ASD have an IQ of 70 or less, while another survey also from Statista revealed that as much as 9% of children were chronically absent from school due to having an ASD. 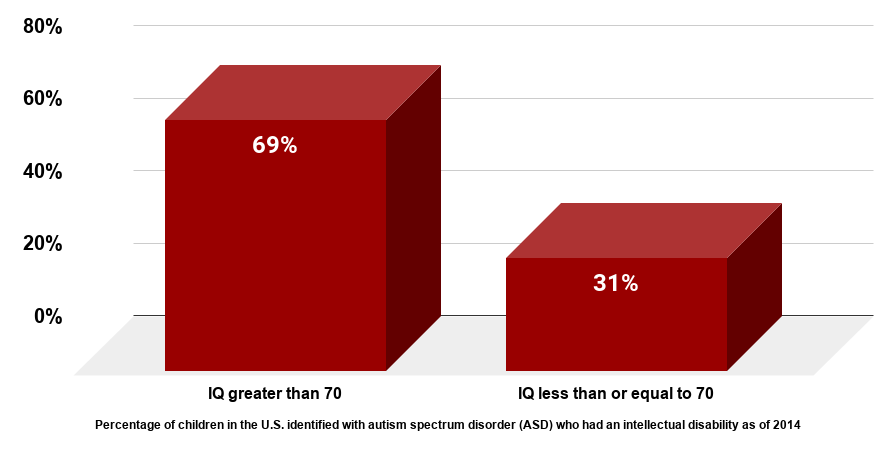 Prevalence of chronic school absenteeism among children aged 5 to 17 years with select developmental disabilities in the U.S. between 2014 and 2016. Source: Statista​ 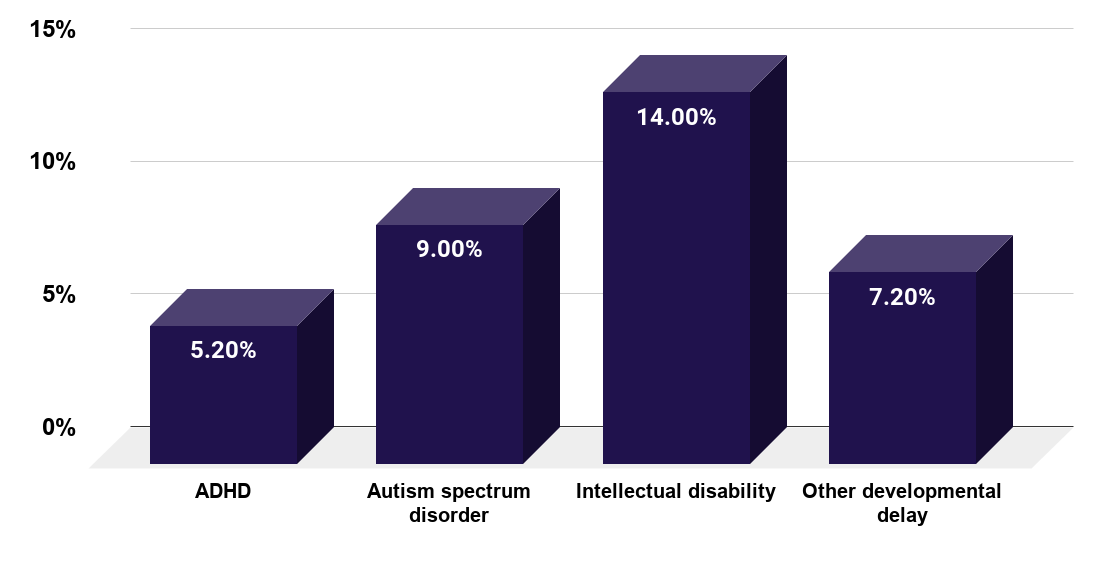 Having autism is however not the end of the world for either the child or adult who has it, and they can still lead full, enjoyable, and independent lives if treated properly and on time. Early detection is however key to helping a child successfully navigate a full and enjoyable life into adulthood, with ASD. In the next section, we discuss what our research revealed on the signs and symptoms of autism in children.

How do you know if your child has autism? How to know if a child is autistic.

Autism or any other ASD can be difficult to detect sometimes because it is not a terminal ailment that will show physically on a person. Given that it is a developmental disability, it is only picked up at a later stage once some cognitive and developmental challenges start to become very obvious.

In general, it has been shown that a child who is autistic will show some or all of these common signs of autism:

If you see any of these symptoms in your child at an early age, immediately seek the help of your child’s doctor. Point out your observations to him/her. If they tell you that you have nothing to be worried about and you are still not satisfied, seek a second and third opinion. Also, check out the early childhood system in your State’s public health offices for more help. The CDC’s website here has very useful information and contact numbers to call. Check it out and make use of them.

You would also like these related articles on Gifts for teenage autistic boy and Gifts for Asperger’s child.

1. What are the signs and symptoms of autism in toddlers?

It is not very easy to pick up autism symptoms in toddlers. It has been said that some autistic characteristics in toddlers are the following:

2. What are the reasons for poor eye contact in toddlers?

3. If not autism then what?

There are other developmental disabilities such as ADHD, Asperger’s, amongst others. To know if it is not autism but something else at play, it is best to consult a medical specialist immediately if you notice or feel that something isn’t quite alright.

Remember, ASD is not a death sentence. Don’t lose heart in your unconditional love for your child. Keep spending more time with them. Your child will come out stronger. Your detecting it early is great and will help your child overcome this challenge. We have a helpful article on Activities for 2 year old autistic child which can help you with other helpful activities you can engage them with to help them with developmental exercises.

What to Do If Your Child is Addicted to Video Games

What to Do If Your Child is Addicted to Video Games WhatToGetMy Instructional Article First you will need to identify significant  behavioral changes in your child resulting from video game content. Then you will have to monitor the amount of time your child is putting 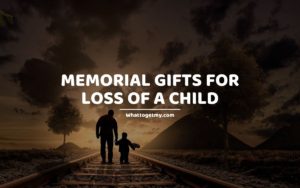 24 Memorial Gifts for Loss of a Child

The loss of a child hurts unimaginably. It is a grief that seems almost impossible to console. The hurt lingers for years and without the right support, some parents take extreme measures to relieve themselves of it. If you know a bereaved parent personally or 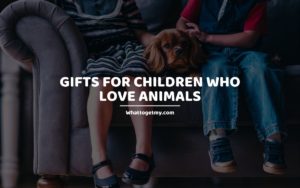 Gifts for Children Who Love Animals

Children are crazy about animals. They are either completely obsessed or obsessed and also want to get a pet. Most parents avoid getting a pet by buying a lot of other animal-theme gifts and stuff. That’s smart, but not enough. If a child loves animals 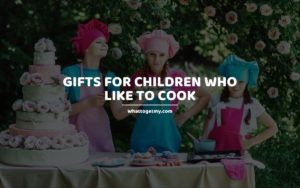 So, you have a junior chef in your family? Say no more, we are here to help you find the best gift for the little one. Whether you’re buying a gift for a birthday, Christmas, or any other occasion, you want to make sure you’re 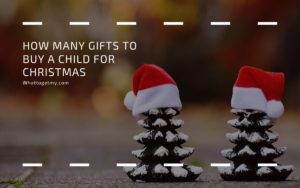 How Many Gifts to Buy a Child for Christmas

How Many Gifts to Buy a Child for Christmas WhatToGetMy Instructional Article With the holidays around the corner, the question of how many Christmas presents per child is okay to buy becomes one of the main parent preoccupations. It’s a fair question. These days, tech 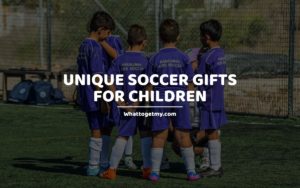 If you have a young soccer fan in your family, you probably want to give him or her a themed gift. Most parents and family members opt for soccer balls, which is a great gift, but you might want to be cooler than that. Kids 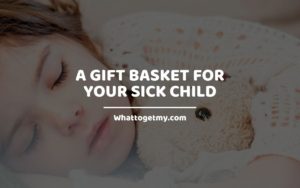 A GIFT BASKET FOR YOUR SICK CHILD

A GIFT BASKET FOR YOUR SICK CHILD WhatToGetMy Instructional Article If you have a sick child, you know it can be difficult for both you and your child because nothing breaks your heart more than to see your child feeling utterly miserable and all you 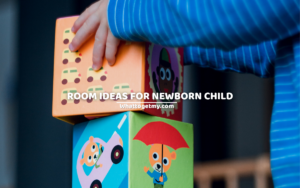 5 tips when deciding on room ideas for newborn child

5 tips when deciding on room ideas for newborn child WhatToGetMy Instructional Article You won’t find pictorial samples of baby rooms in this article because there are tons of them online. However, you’ll find 5 valuable tips that will inform your choice while skimming through 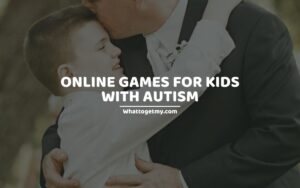 11 Online Games for Kids with Autism

11 Online Games for Kids with Autism WhatToGetMy Instructional Article Autism is a disorder that affects people’s ability to communicate and identify human behavior. Games and activities are important for autistic kids because they help them develop skills that will help them fit in better 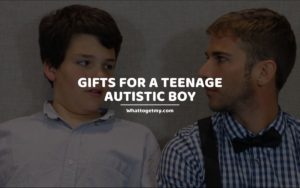 Gifts For a Teenage Autistic Boy

Buying presents for any teenager is tough! With an autism diagnosis added, you’re in a puzzle about what to do. You might want to choose useful gifts for a teenage autistic boy that will make him relax in everyday situations. Stress relief is essential when